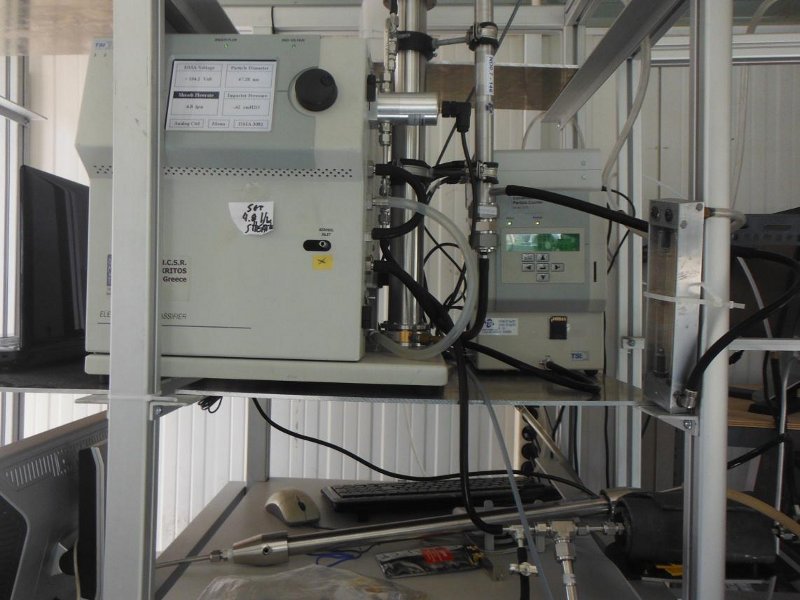 Number size distribution measurements are conducted by means of an SMPS unit. SMPS consisting of an electrostatic classifier (TSI 3080) and a condensation particle counter (CPC). First, the classifier separates particles by size according to their electrical mobility. Then, particles which are size selected with the electrostatic classifier pass to the CPC (CPC 3772, TSI) in order the number concentration to be measured. Aerosol particles pass first through a neutralizer which contains a Kr-85 radioactive source. The source brings the polydisperse aerosol to equilibrium (Boltzmann) state. At this equilibrium state, the distribution of charges on the particles is given by Boltzmann’s law. Then, the charged particles enter the Electrostatic Classifier (EC, TSI 3080), which separates them due to their electrical mobility. The electrical mobility of a particle is defined as the ratio of the constant limiting velocity a charged particle will reach in a uniform electric field to the magnitude of this field [Willeke and Baron] and depends mainly on the particle size and electrical charge. The EC consists of two concentric metal cylinders. The incoming sample flow (1lt/min) containing the polydisperse aerosol is directed together with laminar particle-free sheath air (10lt/min) parallel to the HV-Rod. A negative voltage applied to the inner cylinder (collector rod), causes the particle of positive polarity to be attracted to the collector rod. The outer cylinder is grounded. Particles with positive polarity and higher mobility are precipitated on the upper portion of the rod and those with lower mobility are carried along with the excess air. Only a few particles within a narrow range of electrical mobilities exit through the slit at the bottom of the collector rod. The selected particle diameter can be changed by ramping the voltage. Particles which are size selected with the EC are then counted with the Condensation Particle Counter (CPC, TSI 3772). The CPC counts the aerosol particles that pass the EC. Inside a CPC incoming particles are enlarged due to vapor condensation. This is done in a heated saturator where alcohol vapor condenses onto the particles, causing them to grow into droplets. These droplets are then detected with a laser beam.

The campaign is organized and funded through the ACTRIS, the European Research Infrastructure for the observation of Aerosol, Clouds, and Trace gases.